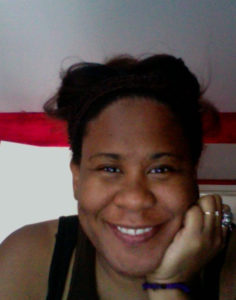 Kristina Leath-Malin is a filmmaker, scholar, screenwriter, and digital artist from Detroit, MI currently living in Brooklyn NY. To date, she’s completed her bachelors (Philosophy) and two masters degrees (MA/MFA – Media Studies) at Long Island University. Her first published work was a look at the evolution of women in French Horror Cinema –“Objectification Repackaged: the Women of 21st Century French Horror”. She continued her feminist scholarship by bringing it home to the states with a personal look at Black Women in American Horror Cinema – “My Final Girl”. This work has culminated in a short documentary film, web series, internet database, and soon to be published book.

Her work has a continued focus on the feminine narrative in all its aspects from race to sexual orientations to culture and ageism in an attempt to challenge the patriarchal history of the cinematic narrative. She has also written for both stage and screen. Most recently, her short play “The Business of Love” spotlights the life, love and work of Alice B. Russell (One of the 1st Black female producers in the US and wife of Oscar Micheaux) This production were featured in the NYC’s Estrogenious Fest as well as the Theater for a New City NYC. On the film front, her short feminist films: “One for the Road” a Stephen King “Dollar Baby” contract (Official Selection at: Female Eye and Ax Wound feminist film Fests) and “My Final Girl: Black Women in American Horror” short doc (Official Selection at Final Girls Berlin Film Festival and Web Series Global Fest) featured a 90% women crew and cast. Her film reviews of films written by, directed by and/or featuring females driving the narrative can be found on her blog KLM Brooklyn.

In addition to her writings, she mentors graduate students through Raindance Film Fest’s MA program and podcasts with “The Script” (NY Screenwriters Collective)